Here is another blog post about Canada's connections to the American Civil War.  I recalled being told years ago that General William T. Sherman once visited the city of Winnipeg, Manitoba.  One of the city's premier clubs, the Manitoba Club, even boasted about it on their website.  Being a historian, I wondered if this was true.

It turns out that it is.  Sherman visited the city in September of 1886.  He and one of his daughters returned to their home in New York City from a trip to the West Coast of the United States via the then-newly completed Canadian Pacific Railroad. Indeed, the president of the CPR, Donald Smith (later Lord Strathcona, who used his wealth to outfit a cavalry regiment for the Boer War in 1899.  It still serves in the Canadian Army today) accompanied the General on the trip.

Perusing the Manitoba Archives' superb website, I found notices in two local newspapers about the visit.  The first comes from the Brandon Sun of September 9, 1886. 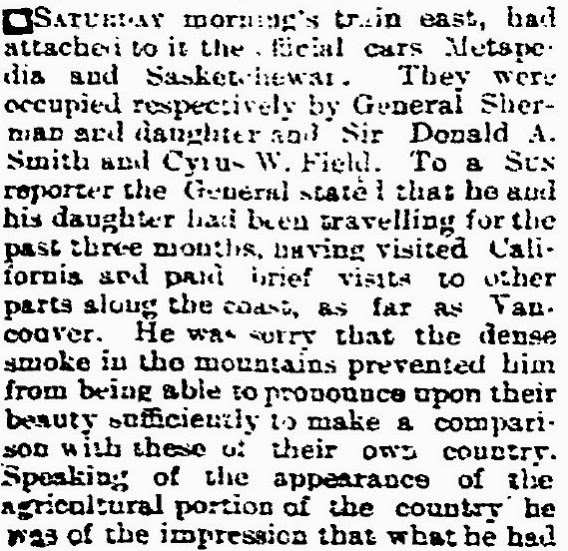 Cyrus W. Field was an American-born investor who laid the first trans-Atlantic submarine cable in 1858, and who had extensive contacts in Britain, Canada and the United States.

I can find no evidence about Sherman's claim to have visited seven years before, but it could be possible.

The second excerpt comes from the Minnedosa Tribune.  Although only a small town west of Winnipeg, surviving issues of this newspaper provide extensive coverage of Manitoba's early years. 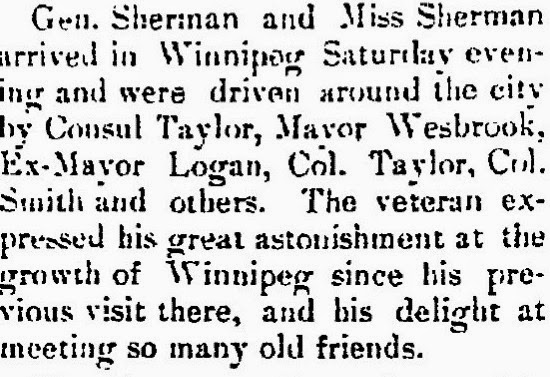 The consul was James Wickes Taylor, a New Yorker who represented the U.S. government in Manitoba from 1870 to 1893.  Henry Shaver Wesbrook (or Westbrook) was the mayor at the time.  His predecessor, Alexander Logan, also attended.

Although brief, Sherman's visit nonetheless brought out many of the area's dignitaries.  One can imagine that the local branch of the Grand Army of the Republic, headed by Harper Wilson, an Irish-born veteran wounded at Gettysburg, turned out to see the famous commander. Sadly, no records have survived from this organization.  Here is just another of the ways in which the American Civil War shaped Canada.
Posted by Scott at 5:17 PM