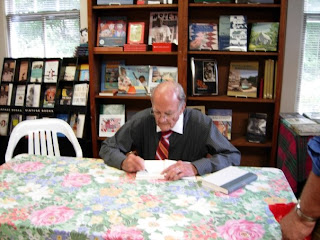 A special blog entry today.  This morning, Senator George McGovern of South Dakota passed away at the age of ninety.  He ran as the Democratic candidate for President in 1972 against Richard Nixon, losing badly.  I met him in 2009 at Capitol Books and News in Montgomery where he signed my copy of his Time-Life book on Abraham Lincoln.  Prior to his political career, McGovern taught history, receiving his doctorate from Northwestern University outside of Chicago. 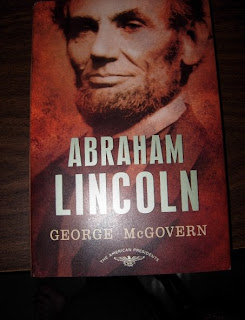 As part of my academic training, I try to travel and seek out the places that I research and teach about.  I've been to many Civil War sites varying from Fort Sumter, Bull Run, Shiloh, Antietam, Gettysburg, Vicksburg, and Appomattox, as well as Ford's Theater.  I aim to visit Wheeling, W.V. some day too given its importance in founding the Mountain State.  Meeting Senator McGovern ranks among the rare occurrences when I meet an actual historical figure.  I also met President Jimmy Carter in Plains, GA in 2007. 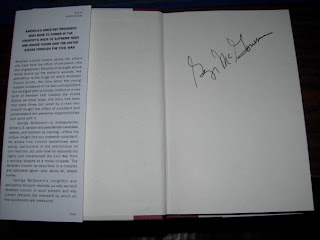 Rest in peace, Senator.
Posted by Scott at 5:43 AM No comments: