Sorry for the long delay but I've been working on another project lately.

I found this article in the Opelika-Auburn newspaper the other day on my favorite subject: bad history.  The Lee County Historical Society in Loachapoka runs "Pioneer Park", exhibits about what its creators believe 1850s to 1920s East Alabama resembled.  They have a blacksmith's shop, weaving, quilting, spinning, a one-room schoolhouse, a log cabin, an early doctor's office, a dry goods store, and how to do laundry.  They even have a Native American exhibit.

What's missing from this?  The above may have been parts of life in Lee County, but at least half of the population would not have enjoyed their benefits.  Those people were the enslaved workers in the parts of Tallapoosa, Macon, Russell and Chambers counties formed into Lee County in 1866.  Slaves may have worked as blacksmiths, weavers, spinners, laundresses or even in stores, but the above exhibits present them as if they were part of a kinder, gentler age.  They appear as if east Alabama was a self-sufficient, self-reliant area untouched by the outside world.  Well, this is wrong.  The area was, in fact, a major cotton producer and exporter, shipping bales of cotton picked by slaves either by rail to Savannah or Mobile, or by water down the Chattahoochee River to Florida.  Over 100,000 slaves resided in the area, around 50% of the population.  Their lives aren't being presented here.  Where's the auction block or whipping post?

There is a good reason for this, a common one in history: local people prefer an acceptable and tolerable past.  No one likes to be the bad guy in the past, especially in ways they can control.  Lee County is no different than other places that I have seen, such as Russell County Museum in nearby Fort Mitchell, AL, Stone Mountain outside of Atlanta, Heritage Park in Calgary, AB, or Lower Fort Garry in Manitoba.  Each sanitizes the past of conflict, racism, and exploitation in search for a usable past.  Everyone should read Cathy Stanton's The Lowell Experiment for how this worked in a park created from a old Massachusetts mill town.

Sadly, the desire of people to maintain a usable past works against a fuller understanding of history.  It'll be a hard, long fight but it can happen.  I urge patience.
Posted by Scott at 2:42 PM 2 comments:

Recently, discussions have emerged on several blogs about Civil War-themed toys.  Kevin Levin's Civil War Memory drew his many readers' attention, including mine, to the Andersonville Prison playset.  Many seem mortified by the prospect of children (young and old) using this toy to re-create the horrors of that terrible Confederate prison in western Georgia.  Mr. Levin is quite correct to think this way, but this is just the tip of the iceberg.

Wooden and metal soldiers have been common for the past two centuries, dating as far back as the Napoleonic Wars.  Their proponents allege that they connect young people with history.  In many cases, the uniforms and equipment are authentically presented.  Famous generals receive their own figures.  Plastic replaced them in the mid-20th century, just in time for kids to have their very own Nazi figures.  Even today, one can get a Utah Beach playset.  I wonder why they didn't have one for Omaha Beach.  I once had an Army Men video game for the Playstation years ago.  It was a great game.  But they all have a darker side:

These toys sanitize the violence inherent in war, and if they do not glorify them, they certainly valorize the conflicts they represent.  They present a totally inaccurate view of the past.  It shows, I think, the tendency by the public to see the past in literary terms: heroes and villains, drama, tragedy, comedy, and the like.  All of these views distort the past for profit - although caveat emptor (buyer beware) because self-control is a responsibility.

When I think of this subject, I'm reminded of this scene from the 1987 movie The Living Daylights where James Bond confronts the villain Brad Whittaker in his toy room while he 'plays' with his Gettysburg battle scenes.  Using a gadget and a statue of Wellington, Bond helps Whittaker meet his Waterloo.  Classic Bond humor.
Posted by Scott at 7:22 AM No comments:

Who Do You Think You Are?

I recently started watching the NBC series "Who Do You Think You Are?" airing Fridays at 8/7c.  It depicts celebrities' travels through their family history.  Some of the journeys are fascinating, particularly those who encounter the 'tough stuff' of the past such as slavery and the Civil War.  Matthew Broderick discovered his grandfather was a hero in WW1, while his great-great-grandfather fought in the Civil War, dying outside of Atlanta.  They discovered his heretofore unmarked grave.  Vanessa Williams found out that her Civil War ancestor, an African-American who proudly spread word to the enslaved of the Emancipation Proclamation, lived in Queens, New York with his white wife.  Reba McIntrye was shocked when she learned that a North Carolina ancestor sold slaves, yet showed more grief over that person's life as a teenager cast out of England to be an indentured servant in the American colonies.  Black celebrities such as Emmitt Smith and Spike Lee discover what their slave ancestors endured during and after the 'peculiar institution' ended.  One of my favorite moments: Martin Sheen's response to the revelation that two lines of his Spanish ancestors had clashed in the 1700s - one, a judge, persecuted a young woman.  Their descendants later married.  Amazing.  I haven't seen all of these episodes yet, but I am hooked.

The series is by far the best advertising for which Ancestry.com could ask.  I have an annual subscription which has helped my research immensely.  I also like seeing some of the familiar archives and historians who appear in the series.  Keep up the good work.  I understand that there are British (where it began), Canadian, Irish, Swedish and other versions of the show.  I wonder how many of their Canadian celebrities find out to their horror that they have *gasp* American roots.
Posted by Scott at 7:16 AM 2 comments: 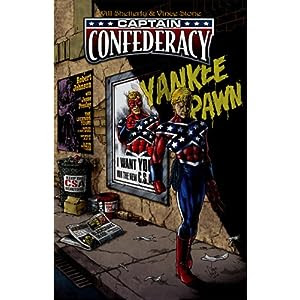 Having been raised on popular culture, I'm interested in the ways the Civil War appears in other mediums.  I've already blogged about video games and movies, but realm of comic books deserves some attention.  A few weeks back, Kevin Levin blogged about Squidbillies cartoon and The Gunhawks comics from the early 70s.  Keith Harris mentioned Les Tuniques Bleues or The Bluecoats a Belgian comic series now bring published in English about a year ago, based on my suggestion.  In each, the authors and artists join forces to discuss the Civil War.  Though a kids cartoon, the Squidbillies brilliantly mocks the commercialism surrounding Confederate heritage.  The Gunhawks purports to show biracial cooperation between a master's son and a slave during the war and afterwards, a difficult thing to believe.  The Bluecoats follows the antics of two Union soldiers, one dedicated and the other malingering, through the war.

I found another that takes a different approach to the topic: Captain Confederacy.  Written by Will Shetterly and drawn by Vince Stone, the alternate-reality comic first appeared in 1986.  The plot of the first installment, "The Nature of the Hero," follows a fake super hero, Captain Confederacy, and his white female sidekick Miss Dixie, aka the Dixie Duo.  The Captain aims to uphold "justice and the Confederate Way" - meaning paternalism towards African Americans, and the independent slaveholding republic (North America is divided into several countries, including the US, the CS, Mormon-led Deseret, the People's Republic of California, Pacifica, Indian-led Great Spirit Land, Republic of Texas, and the Free State of Louisiana).  The Captain, however, suffers a crisis of conscience when he discovers that he is a tool for government propaganda.  Merely an actor who received the Ultimate Potential serum, his sole job is to maintain the status quo.  His nemesis, Blacksnake (!!!) is also an actor named Aaron Jackson.  He is exposed as fraud and eventually becomes a rebel to the Confederacy.  In the end, the Captain is forgotten and replaced by a new duo, Kid Dixie and a new Captain.

Shetterly produced two other volumes, "Yankee UFO" and "Hero Worship" but neither are as erudite as "The Nature of the Hero" in discussing the war.

Captain Confederacy strikes me as a commentary on the Civil War, racism, gender and the superhero genre. As an alternate-reality idea, it shows what the Confederacy was: a lie.  It was based on a stern, conservative, patriarchal system that resisted change.  Whites and blacks, men and women - as well as a half-Chinese, half-white character named Lee to mess with the narrative - had their places, and one could not stray from those roles.  He and Miss Dixie represent the ideal Confederate (white) man and (white) woman - one strong and virile, the other feminine yet submissive.  Blacks are expected to accept white rule for their own good.  Two black characters, Aaron Jackson (whose father is the 'richest Tom' in the CSA) and Kate Williams, struggle against the system.  Captain Confederacy is forced to reject the system he symbolized.  Readers should call him the anti-Superman - he derives his power from a drug, his reputation exposed as a government plot, and his worst enemy is himself.  In this sense, Captain Confederacy presages the "CSA" documentary by several years.  The two argue that slavery and slaveholding lay at the heart of the Confederate experiment.
Posted by Scott at 12:48 PM No comments: