It's been six months since my last entry.  I've been busy with a new job and a host of other projects.  The other day, I came across this entry on a database of American First World War veterans.  It dealt with African American veterans in honor of Black History Month.  The life of George St. Pierre Brooks is nothing short of incredible.  Born into slavery in Kentucky in 1846, he was forced into Confederate service at the outbreak of war in 1861.  Soon captured by the 7th Ohio Cavalry, he served with them as a farrier (horse tender) for the duration of the conflict.  Afterwards, he joined the U.S. Army as a cook for the next thirty years, encompassing service on the western frontier and in the War with Spain.  Had enough yet?  I'm not done.  He moved to Canada in the early 20th Century and, believe it or not, enlisted in the Canadian Army in the Great War at the age of 73 - but he claimed to be 40.  He did not last long, however, and returned to Winnipeg in 1915.  He died at age 102 in 1948, being the last Civil War veteran in Canada.  Wow, that's some life.  He died in a veteran's hospital literally down the street from where I grew up.  What more can I say: Winnipeg has lots of connections to the Civil War.

Here's an image of his obituary. 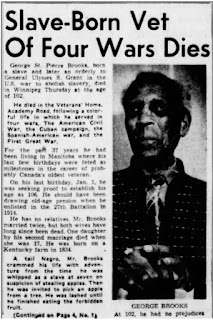 Believe it or not, he was not the only Civil War veteran to serve in the First World War.  In 1917, the U.S. Army brought Major General Peter Coonover Hains out of retirement to serve as a chief engineer for the Eastern Seaboard defenses.  He was 76 years old at the time. Hains began his service in 1857 when he entered West Point.  Graduating in 1861, he served in the United States Army as an engineer.  He ended the war as a 24-year old lieutenant colonel, but retired in 1904 as a brigadier general.