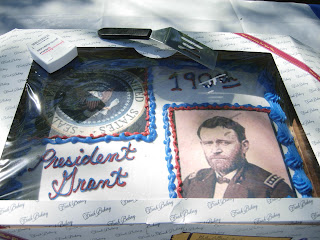 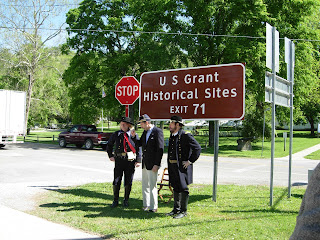 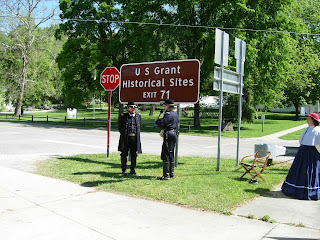 I had a most interesting encounter yesterday.  As I head north on a long trip, I visited the Ulysses S. Grant Birthplace in Point Pleasant, Ohio - one of several presidential sites I aim to see on this trip.  The day of my visit turned out to have been his 190th birthday.  In commemoration, the local historical societies from Clermont and Brown counties, arranged to have a new signs directing traffic towards this site.  The pictures above show the sign, the two re-enactors depicting Grant and (of all people) Custer (!!!), and the cake they baked for him.  The crowd was somewhat meager - probably twenty people.  While they clearly had an economic motive at stake - the local director gave me a dining suggestion - it was nice to see them take their history seriously.

Why the Civil War matters to Canadians.

Someone asked me the other day why the Civil War matters to Canadians.  I had to ponder why this question would be posed.  To me, it is as simple as it gets.  Confederation in 1867 would not have occurred when it did and in the form it took without the Civil War.  The books by Robin Winks and Greg Marquis have made this case beyond reproach.  Yet, despite the qualities of those books, neither appears to have had much effect on Canadian historiography - most definitely in the public realm.  This is, I think, a mistake.  The Civil War was as important to Canadian history as the War of 1812.

Much of this comes from the perils of writing a 'national' history - crafting a narrative that unites and reassures disparate members of the country.  It seems to me that Canadians have tried to purge any semblance of U.S. influence over the nation’s development, and limit that of the British or French.   The Civil War merits barely a few sentences in textbooks as a causal factor behind Confederation.  While this is true, it is hardly a fair representation.  Such a narrative makes it appear as if the war forced the Canadian population together in fear of a U.S. invasion.  This omits the divided opinion within the colonies on the war, actions in support of both sides, the role of the British government at the time trying hard – and successfully – to avoid greater conflict, as well as the controversial Confederation process itself.  It ties in with the dominant meta-narrative that Canadians appear to have that the U.S. is out to get them.  That the two countries have had extensive interconnections before, during and since the 1860s has failed to budge this idea.

However, this desire for a ‘national’ history is no excuse for a bad one.  It was impossible for anyone in North America to escape the effects of the largest and costliest war ever fought in this continent.  No one in the United States did, and works on Mexico, the Bahamas, Cuba, the Caribbean, Britain, France, Japan, China, Russia or South Africa testify to its worldwide impact.  Canada felt its effects, and made its effect felt, more than any of these.  I’d like to point out several of these effects:

1)     Somewhere between 18,000 and 50,000 British North Americans served as soldiers, sailors or marines in the Civil War.  Winks and Marquis debate the numbers, but even the low estimate indicates that more British North Americans fought in the Civil War than any other nationality, and even some states.  They also believe that most supported the Union cause rather than the Confederacy.  Many more may have journeyed south to work in factories or on farms in the U.S.  We probably will never know how many made either trip.  It is hard to define or identify them since travel was so common place then.   One of those who fought was Calixa Lavellée, the composer of the music to “O Canada.”  A musician with the 4th Rhode Island Volunteers, he was wounded at the Battle of Antietam in September 1862.

2)     Many of these former servicemen returned to Canada or travelled north after the war and established veterans’ association.  The Grand Army of the Republic had eight branches in Canada, four in Ontario, three in Quebec and one in Manitoba.  This was the second such group in Canada, following the Army and Navy Association of British veterans.  The G.A.R.’s impact on Canada remains unknown.

3)     Little is known about the economic support the colonies gave to the U.S. during this conflict, which Canada has done from the First World War up to the Iraq War.  If British neutrality laws did not impair exports, this could have been a major asset to Lincoln.  It is known that an influx of deserters and draft evaders, as many as 20,000, lowered wages in Canada during the war.

4)     The pro-Confederate actions committed by Canadians to impair the U.S. war effort, such as the St. Alban’s Raid, the seizure of the S.S. Chesapeake, and the escape of the C.S.S. Tallahassee, are omitted.  These acts challenge the idea that Canada was a passive actor in the war.  They contributed to legitimate U.S. concerns about their northern frontier.  Fortunately, they saw a greater menace from the French in Mexico than the British in Canada.  The Treaty of Washington resolved these issues for all time.

5)     Canadians like to take pride in their role in the Underground Railroad, the last stop on the fabled escape route for the enslaved.  This, however, is only half of the story.  Most left after the war, partly because of the promises of racial equality under Reconstruction, and of hostility in Canada.  If the estimated 30,000 to 100,000 African Americans had stayed, its history would have been changed.  Racially exclusive immigration laws kept the black population of Canada would remain below 20,000 until the 1960s.  Had they remained, Canadian race relations could have been very different.  In areas where blacks lived in numbers, such as Nova Scotia or New Brunswick, they faced all the trappings of segregation and marginalization more commonly found in the former Confederacy, and well into the Twentieth Century.

6)     For all the resentment of the U.S. and its system of government, Canada’s constitution resembled theirs in many ways.  First, the fact that they had a constitution.  Second, the federal system which was unknown anywhere in the British Empire at the time – copied in 1901 by Australia.  Canada modified the division of powers to keep authority centralized rather than devolved, a slight contrast with that of the U.S.

So, here are six reasons why the Civil War matters to Canadians.  The people, more than their leaders, participated in the conflict in a myriad of ways.  Sometimes they supported the U.S., while opposing them at other times.  It was a major event in their history.  If the War of 1812 ensured that the northern part of North America would remain in British hands, the Civil War defined its style of government, its mixed approach to its southern neighbor and, finally, its racial makeup.  More work is definitely needed on this topic.
Posted by Scott at 11:41 AM 4 comments:

Is the Lost Cause unique?

Today, April 9th, is significant to me for two reasons.  First, as a Civil War historian, it is the 147th anniversary of Lee's surrender to Grant at Appomattox Court House, Virginia.  This traditionally marks the end of the Civil War, though fighting would continue on until June in Texas and indeed November when the CSS Shenandoah gave up her round-the-world sailing mission against United States shipping.  It is also the supposed start of the Lost Cause, the historical vindication of the Confederate cause.  Lee's statement to his troops that "overwhelming numbers and resources" had bested them rather than any shortcomings in their cause, spirit or materiel.

Secondly, as a Canadian, it makes the 95th anniversary of the Battle of Vimy Ridge in April 1917.  I was told as a youth that this was Canada's nation-making moment.  Canadians seized and held this important point on the Western Front which had resisted British and French attempts to take it.  It combined all four Canadian divisions in France for the first time, was largely planned by Canadian leaders, and executed by well-trained Canadian troops.  Afterwards, the Canadian Corps would be the most feared Allied unit, rivaled by the Australian and New Zealand Army Corps (ANZAC)s.  After the war, Canada would stand as an independent nation.

Such sentiments boil my blood.  Each legacy is fundamentally flawed to the point of dishonesty.  To start, many groups did not participate in the same war or at all in the portrayed event.  The Lost Cause obscured the huge divisions in the South over secession.  To cite only the most obvious examples, West Virginians, Marylanders, and Delaware troops stood with Grant at Appomattox, while Marylanders and other Virginians surrendered with Lee.  Also, United States Colored Troops - many of whom had been slaves four years before - also observed their former masters' capitulation.  Lost Cause enthusiasts (I won't call them historians) merely exclude southern Unionists as traitors or non-existent, while maliciously insisting that blacks fought for the same Confederacy trying to keep them in bondage.  They also portray the home front as unified and happy, even dignified before the 'evil Yankees' showed up.  Civil War historians have sought to correct these images with, I'm happy to say, great success if controversy in public circles.

Canada is no better.   The Canadian troops who stormed up Vimy Ridge on April 9, 1917 were overwhelmingly white and English-speaking.  A handful of First Nations participated, despite efforts by white recruiters to keep them out of the war.  A paltry few Asians or blacks were there too, most of the latter in (of all things) a forestry unit.  Moreover, women and the home front experienced it too, although differently.   Even fewer Quebecers were there, most of them in the 22nd Battalion - now the famous Royal 22nd Regiment or the Van Doos (Vingt-Deux = 22 in French).   They, far more than the others, did not share in feelings of nationhood.  Quebec opposed the war from the start.  They resisted volunteering, or anyone from volunteering. In fact, anti-war feeling ran so high that separatist feeling began and persists to this day.  The memory of the battle, moreover, carried on along these lines.  So, Vimy Ridge can hardly be called a nation-building experience since only part of the country, admittedly the dominant part of it, went through it.

In this vein, much of Canada's history resembles the Lost Cause.  However, I think all history is like this.  Every society seeks a usable past in order to foster unity, communication and pride.  No one likes being the bad guy.  So, in every society, people write the history that they wish to express.  Sometimes they are careless, other times they have economic interests at heart (what I call the "chamber of commerce" version of history), and sometimes they are malicious in implying unity where it never existed.  Sadly, no matter how many solid, professional-standard histories are produce, this trend will continue.  So, the Lost Cause and Canada's history are reflections of a near-universal trend.
Posted by Scott at 11:28 AM No comments: