A Confederate Flag in Canada 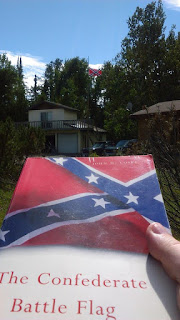 Hello again.  I just returned from a trip to northwestern Ontario with the family.  Along the way, I came across an actual Confederate flag flying at a local house.  I won't say where to protect its resident's privacy.  Ironically, I just happened to have a copy of John Coski's 2004 book The Confederate Battle Flag: America's Most Embattled Emblem on me at the time.

This comes at a time when the Confederate battle flag has come under increasing scrutiny.  In June, a white man killed nine African Americans at a church in Charleston, South Carolina.  After his arrest, pictures emerged of him with Confederate flags.  Demands to take down the flag everywhere soon came from across the country.  This was a tall order, but down they came. Walmart and Amazon stopped selling items with the flag on them.  Most remarkably, the South Carolina Legislature voted to remove the flag from its Confederate war memorial at the Capitol in Columbia. 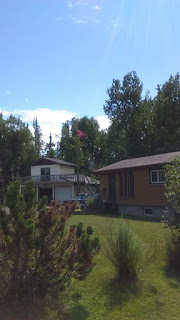 The Confederate flag is far less common in other countries but it appears from time to time. As I understand it, some use it as a substitute for the Nazi Swastika, which is banned in numerous countries.  This may or may not apply to the Swedish van covered in Stars and Bars that I saw in late 2013.  I am not sure why this homeowner flies the flag, because I never asked.  I certainly hope that they do not subscribe to any such philosophy.  Yet they may do so as an act of defiance, oblivious to the racist symbol that it clearly is.  All it proves is that the Confederacy's legacy is well known around the world.
Posted by Scott at 3:07 PM No comments: